Courthouse Nightclub boasts 25' high ceilings, original hardwood floors and four authentic roaring fireplaces. This elite Toronto hotspot is the perfect place relax and dance the night away. Courthouse Nightclub plays the best mix of music and is one of the best places to celebrate the weekend. If you are looking for the ultimate VIP experience, hang over the elite VIP lounge booths located in the ...

Courthouse Nightclub plays the best mix of music and is one of the best places to celebrate the weekend. If you are looking for the ultimate VIP experience, hang over the elite VIP lounge booths located in the upper floor of Courthouse Nightclub. The historical Courthouse feel gives this nightclub a sophisticated and cultured vibe. Meet the best looking people in the city who know exactly how to party inside Courthouse Nightclub in Toronto. 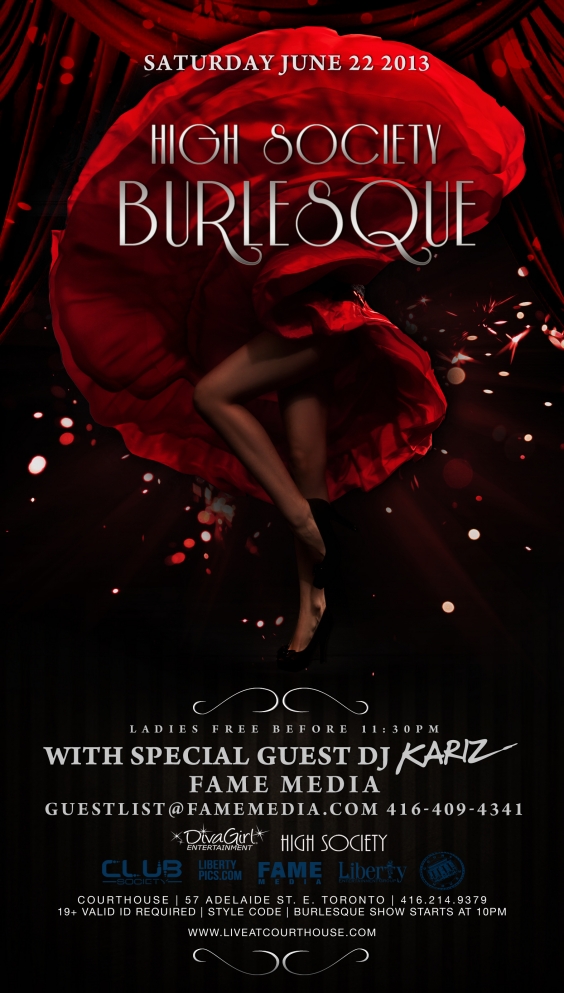 submitted by Aman for Courthouse Nightclub on April 14, 2013

My birthday party got ruined ! Great looking place but no crowd and the crowd is for really old people! In total there might be 15-20 people including my 8-9 friends.
I was so embarrassed in front of my friends.

I will not suggest anyone who to visit this place.

submitted by Seriously for Courthouse Nightclub on June 15, 2012

I had the same issue, no response at all.

submitted by Annoyed for Courthouse Nightclub on June 15, 2012

I have literally called for an entire week to order VIP & bottle service.. left multiple messages and yet have still not received a call back! You would think the company/manager would call back there customers to gain more service at their bar...but apparently not

submitted by oidhidnm for Courthouse Nightclub on June 6, 2012

submitted by alex for Courthouse Nightclub on June 3, 2012

ordered a booth and had a great time, only issue was the length of time it took for the manager to call me back about booking the booth.

Same beat…over and over again

submitted by Marcio for Courthouse Nightclub on August 28, 2011

Great atmosphere and great bar service. I have no complains about how the staff treat you. The only thing that turned me off at this place is the lack of good music. The beat was always the same regardless of which song was playing. The song would only be speed up or slowed down to match the beat that was overlaid on top.

submitted by mohsin irshad for Courthouse Nightclub on August 19, 2011

submitted by mohsin irshad for Courthouse Nightclub on August 19, 2011

submitted by nicole for Courthouse Nightclub on February 26, 2011

I don't go clubbing often and for my Spring break I decided that courthouse would be the one club I went to party at on Friday night considering the mass amount of schoolwork I have to do over the break! So I PLANNED for this night, I thought because I was going on a double date with my boyfriend and two friends that courthouse would be a good scene since I heard it was very couple-oriented and cheaper with guestlist. I made sure to sign up for guestlist and we drove to Toronto early to be there before 11pm (as advertised on website before 11pm with guestlist is free) and when I got to the door they "didn't have my name on guestlist" and so because they screwed up their guestlist we would have to pay cover. It's not like we were a bunch of punk 19 year olds trying to scam in for free, we were two couples who had specifically planned to go to this club and I guess they didn't want to believe us so I decided to keep my dignity and walk out. I'm not going to give my money to a club that isn't willing to make my night special.

We went to embassy instead and the man at the door let us line by pass and put us girls in for free. 4$ drinks all night and we had a great time! This club wasn't overcrowded either so if couples are looking for a cute club with cheap drinks it definitely gives courthouse tons of competition.

submitted by asian_girl for Courthouse Nightclub on February 11, 2011

Location is easy to access, place is HUGEE and colourful (the purple/pink lighting and stuff is bright but pretty) and the crowd isn't too overbearing and too much...i liked the music...mainstream stuff is def for me but they also mix in a bit of house which always makes my party better. it made my saturday nite. im definitely up for going again!!

submitted by Toronto Party Gal for Courthouse Nightclub on February 8, 2011

Ok...so I've heard a lot of mixed reviews about this venue...I was invited out to the Courthouse a few weeks ago for a friend's birthday, and wasn't overly pumped to go since a bunch of my friends had been there in the past and said it wasn't awesome. Well, I had an amazingggg time! The DJs were awesome, playing a bunch of top 40 music and Mashup--it really had the crowd goin. Everyone was dancing up a storm!

My friend said that this place has changed SO much. They said that this place was always a gorgeous venue, but now had the music and crowd to go with it. I'll definitely be back there asap. It's a little off the radar since it not directly in clubbing district, but maybe that's what makes it so awesome...and it's easy to haul a cab to go home :)

submitted by Carm for Courthouse Nightclub on January 16, 2011

When you get to a club at 12:15 on a Saturday night and there is no line up it's nice because you don't have to wait, but you wonder why there is no lineup. Club was dead, I left around 1:15 because it was lame. Music wasn't to bad, mostly mixed top 40's. Wouldn't ever go back and I want my 10$ back. Like an idiot I went a second time, same deal, 12:00, sat night, no line, weak scene. Oh, and there are no women, just guys with their girlfriends. So if you want to go somewhere with your other half, try out this hole.