The Hoxton Is Now Closed

The Hoxton Nightclub is a new club and event venue that occupies what was Sixty-9 lower Bathurst. On any given Friday or Saturday night, there's sure to be a bustling crowd of sophisticated twenty-somethings gathered there. The Hoxton Nightclub is complete with a sleek charcoal grey stage, where the DJs spin and the live bands play. Tucked away in a corner are wooden booths divided by curtains. ...

The Hoxton Nightclub is a new club and event venue that occupies what was Sixty-9 lower Bathurst. On any given Friday or Saturday night, there's sure to be a bustling crowd of sophisticated twenty-somethings gathered there.

The Hoxton Nightclub is complete with a sleek charcoal grey stage, where the DJs spin and the live bands play. Tucked away in a corner are wooden booths divided by curtains. Exposed brick walls enclose an open wooden dance floor, two bars, and a mix of hanging, track, and snake-like lighting. The minimalistic decor is the Hoxton Nightclubs' deliberate way to accommodate corporate and private bookings.

The Hoxton is open every Friday and Saturday night, from 10pm to 2am. 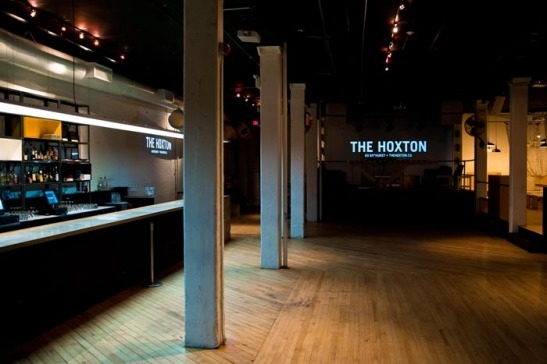 This place gets hated on a lot but i’ve been going here for the last 3 years and have a love hate relationship with the hoxton.

I have to admit though that things have changed for the better in regards to security we used to go here and wait in line for an hour or more when we had pre bought tickets.

We were there for the mad block party last weekend and we were barely in line for 15 mins my boy asked for line by pass and was told it wasn’t needed because the line moves quickly sweet never heard that before.

We were in very quickly the music was load the windows were shaking.

The only thing i would change is the club seriously needs to invest in some ac the place was soo hot as it was crowded.

Please save yourself the time and money and go anywhere else. The bouncers are aggressive, rude and seem to take an large amount of enjoyment out of making your experience as painful as possible. The drinks and cover were both expensive, and definitely not worth the over policed and mostly uninteresting time inside the club. I will never go back and will passionately tell everyone else i know to avoid this place at all costs.

submitted by Jessica Leisa for The Hoxton on June 10, 2016

Went back to the hoxton last weekend after not going for a year.

This place has def changed ownership because its being run a lot better.

The new security guys are much nicer and don't hold the line which is soooo much better because you can get in and dance faster.

I think they even have new bartenders the dj was on point and mixed it up.

I wish it was not soo hot in there you almost have to leave and go outside for a min to get some fresh air.

All in all a good night would go back

One of the male bouncers managing club entry was very combative which was uncalled for since everyone in line was quiet and cooperative. It seemed like he was trying to start an argument in a very passive situation.

submitted by Layla for The Hoxton on February 15, 2016

I attended the hoxton the first time for ship to ship tour with rezz justin martin and destructo.
This venue is extremely small and fills completely to the point where it becomes uncomfortable to dance.
The sound system is not the best i've heard for toronto. The stage is a few over head lights above the dj, no visuals, no screens really nothing to look at but the people on stage. Been to many clubs especially in toronto and this is one of the worst.

The girls collecting the tickets and money had a terrible attitude. Very rude..As i was counting my cash they said they would not collect any coins, strictly cash only. This was very stupid, considering money is money, and i was waiting in line for 45 minutes. I had to go to an atm which they did not even have, and decided not to go back to the club. These two absolute revolting looking bitches need to get fired. They were so incredibly rude, and a huge reason why i will not be going to this club ever again. If it is true that you cannot give coins, it should be mentioned. Not only were they extremely rude, but come on, get some better looking girls to collect money.

submitted by nara for The Hoxton on November 3, 2015

This place was horrible. First, they had us wait in line for 30 minutes and tried to get us to pay an additional $20 to pass the line. Once entering, these two hideous girls with even worst attitudes taking tickets. My ticket wouldn't scan, and they refuse to let me in. I requested a manager or owner, anyone with some authority to resolve the problem. They refuse to call anyone. The bouncer kicked out my boyfriend for literally saying "what the f*** do you mean?". He did not raise a fist or anything like that. He literally got kicked out for this one sentence. My friends who were already in the club left early as well. They said the club is small, the music sucked, and the all the employees were horrible....Especially the bouncers.

Absolutely awful! I like electronic music but this music was the worst of the worst. So uninspired, uncreative, same song all night. I went for my birthday with my boyfriend on the recommendation of someone from toronto. I think they must have hated me because anywhere would have been better than this. Not to mention the 30 dollar cover. I guess it was an event. The wall said "hannah wants". Terrible. Ruined my birthday. I tried to stay as long as i could because we paid so much for cover, but it just became unbearable. You have to be super high on so many drugs to enjoy this place, and it looked like just about everyone else around was. Worst club experience of my life. Totally disappointed with my night out in toronto.

submitted by Stevieray for The Hoxton on January 4, 2014

My girlfriend and i were brutally harassed by a security guard while in the coat check line. She was accused of pushing him which did not happen but he said she did and would smash her face. He grabbed her by the neck to direct her and i grabbed him where he then strangle holded me, lifting me off the ground and trying to choke me right out. He tried to chase me out but another security guard who said he was the security manager held him back and when my friend questioned him he said "i know how he works". I am disgusted by this place i had no idea there were scum like this around the edm crowd it's a total let down, no class at this place i would stay away for your safety and those you travel with.

Witnessed brutal assualt on customer in the male washroom

submitted by graham for The Hoxton on November 29, 2013

At the hoxton i witnessed 3 security guards physically assault and abuse a customer in the male washroom on nov 8th 2013. Three security guards literally stomping on the head of a drunk man in the washroom before picking him up and smashing his face against the stall wall and then back to the floor at which point i yelled for them to stop. I am an avid clubber and understand that security guards must take measures to ensure their own safety and the safety of other customers. This however was a complete abuse of power and should be mentioned. As a security guard your aim is to restrain the victim and then remove them from the premise.. Not beat them with your fists and feet until they are bleeding all over the washroom and then shove their face back onto the floor beside the toilet.
other than that, drinks are expensive and sound is garbage but kaytranada was great.

submitted by Lindsay Geiger for The Hoxton on January 1, 2013

I had an amazing time at the hoxton at new years just wish we could see the pictures where do we find them?