Searching for that perfect mix of tastful music with dramatic inspiration? Look no further. Revival Nightclub is the perfect venue. Revival's space is fun and attractive. Revival Nightclub's Bar boasts an extensive selection of satisfying, quality beverages, including several imported beers on tap. Check out our eclectic listing of cocktails, martini's, wines, champagnes and culinary delights ...

Searching for that perfect mix of tastful music with dramatic inspiration? Look no further. Revival Nightclub is the perfect venue. Revival's space is fun and attractive.

Revival Nightclub's Bar boasts an extensive selection of satisfying, quality beverages, including several imported beers on tap. Check out our eclectic listing of cocktails, martini's, wines, champagnes and culinary delights available every evening. Revival Nightclub's extensive selections, combined with Revival's music and atmosphere will keep you returning for many nights of memorable entertainment.

Revival Bar has been entertaining guests, visitors and fans with the best in live musical performances, the hottest DJ’s, live theatre, comedy since 2002… But Revival Bar is so much more. Revival’s tasteful and flexible space has seen it host hundreds of corporate parties, be a studio for movie shoots, held wrap parties, fashion shows, weddings, symposiums and tradeshows.

Over the years, Revival is proud to have enjoyed artists such as Justin Timberlake, Black Eyed Peas, Kid Rock, Sara McLaughlin, Nelly Furtado, Cowboy Junkies and guests none other than Robin Williams, Conan O’Brien, Ving Rhames and Tyrees to name a few.

With the renovation and addition of Stone Lounge downstairs, Revival Bar has evolved into a full entertainment complex boasting three floors for private parties and separate events.

Revival Nightclub's live music facilities include a stellar sound system, stage and green room for talent. Revival Nightclub features local music ranging from jazz to R&B, soul, funk, rock and blues. It's the perfect venue for a great night out!! 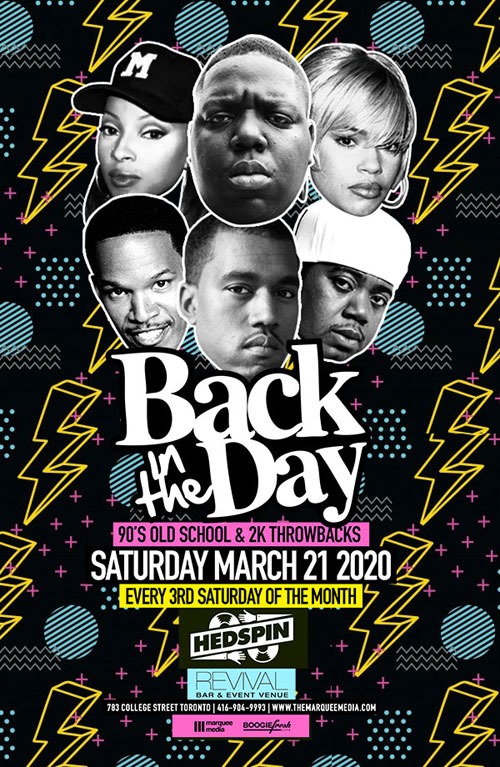 Back In The Day ft. DJ Hedspin

submitted by Niki for Revival Nightclub on December 27, 2015

The nostalgia nights at revival are amazing . It was my first time there last night and didn't expect such amazing music and such a packed club . Keep these parties going cause i'm recommending it to everyone i know that loves old skool music .

submitted by Brooklyn for Revival Nightclub on July 26, 2015

Me and my wife attended there (club revival) to have a good time...Unfortunately people can be jealous and have hate towards individuals because they look better than them. My wife was disrespected by other women for no reason. My wife was and is the most beautifullest woman in the club. Im glade im a humble man...Because i would of knocked a couple people out (rude men)in the club. Most of all...There are too many people in one small area....There should be a code where population control is emplemented. And last....There was no search or pat down for weapons....Unreal.

I rather attend a dollarama convention than attend club rival

submitted by Toronto for Revival Nightclub on March 2, 2014

Empty most of the night and expensive 8 bucks for a bottle of beer. I'll never go there again.

submitted by London for Revival Nightclub on November 19, 2013

For 20$ you'd expect music you can dance to. Horrible venue, small, boring. You can go down the street and for $5 have a great time at the spanish clubs.