After 30 years we say goodbye to a Toronto Icon

Crocodile Rock sets the standard in downtown Toronto when choosing the best after work hangout or weekend hotspot. We have 7,500 square feet of fun and excitement on three floors including an amazing new roof top patio and lounge. The Main Level of Crocodile Rock is where the party begins! A huge five sided bar is ready to serve over 350 people. The main floor offers a pool table, a dining area, ...

Crocodile Rock sets the standard in downtown Toronto when choosing the best after work hangout or weekend hotspot. We have 7,500 square feet of fun and excitement on three floors including an amazing new roof top patio and lounge.

The Main Level of Crocodile Rock is where the party begins! A huge five sided bar is ready to serve over 350 people. The main floor offers a pool table, a dining area, and a raised dance floor for you to show off your latest moves. Large garage doors open onto Adelaide Street for people watching while you enjoy our menu or sip on a fruit flavoured martini. If you want to meet people, this floor is where the action is!

The Mezzanine Level at Crocodile Rock overlooks the main floor and has it's own 30 foot bar to serve you drinks. The Mezzanine Level has it’s own dance floor for groovin' to classic rock and retro 80's. Also available on this floor is a 50 person dining area to enjoy a taste of the South from our extensive appetizer menu. There is also video games, lots of TV's and a pool table for those who just want to relax after a hard day at work. The Mezzanine level of Crocodile Rock now offers a smoking deck.

Signature to Crocodile Rock is our exotic rooftop patio and indoor lounge called "Top of the Croc". This is the ideal space to hang out with your closest friends. This floor features a panoramic view of Toronto's Entertainment District including the CN Tower and Skydome. The indoor lounge can accommodate up to 100 guests. The interior space is highlighted by a 25 foot bar, cocktail tables overlooking the city and your own private dance floor. The patio has retractable awnings and heaters to help battle the elements. This heated patio also offers smokers a great place to mingle. 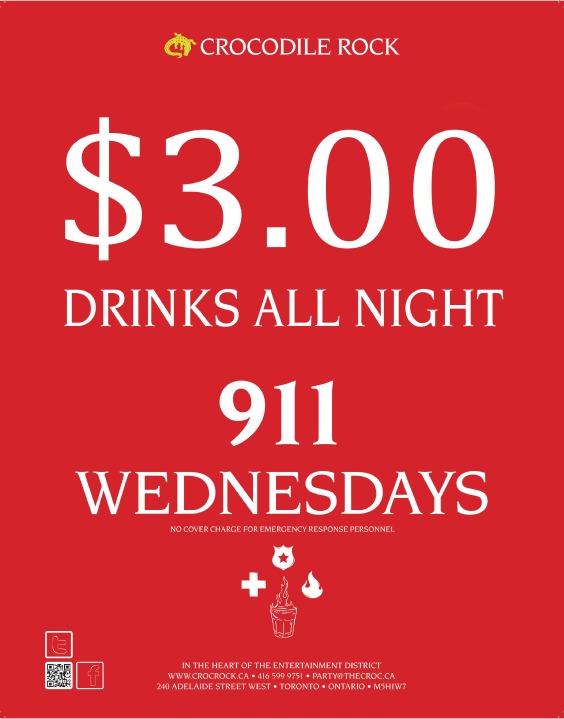 submitted by Cubone for Crocodile Rock on December 28, 2012

Cons:
-You get booted out of your seat if you are sitting at the bar after 11
-Dance floor is awkward to get into and out of
- No breathing room and it is near impossible to walk from one side of the place to the other
-Upper floor is kind-of awkward and is never busy
- Confused between a sports bar, club, or restaurant

Summary: This place can be a good night on special occasions e.g. Haloween. Would not reccomend to go here for a 19th, or any birthday. Overall nothing is terrible but the poor layout makes this place overcrowded when it doesn't have to be.

submitted by mike for Crocodile Rock on June 5, 2012

The best patio in town.

submitted by MT for Crocodile Rock on January 15, 2012

this place is AMAZING! awesome bar, great way to spend a saturday night..

Had potential if staff ran it better and respected capacity limits..

submitted by Madison for Crocodile Rock on July 18, 2011

Ok, so my friend raved about this place cuz its her old stomping grounds. The music was pretty good. It was over crowded tho..like disgustingly so. There was no room to even get on the dance floor and you couldnt get from one side of the bar to the other. I love a good crowd but overcrowded just makes for an uncomfortable experience. There was not enough security from bouncers or staff paying attention to issues. Such as there was a group of very aggressive men who continously kept grabbing, groping and harrassing my gfs and I. One of the girls had to physically restrain a guy at one point becuz they were too drunk to understand what NO meant. Nobody stepped in even though it got very heated, yelling, pushing and such. I suspect she could have punched in in the face and no security would have even done anything at that point. It was slightly ridiculous! Maybe if it wasnt so crazi over crowded they could better see the issues at hand. Drunk ppl on the upper floor were dropping beer bottles and glasses that fell and smashed on the lower level but almost hit ppl on top of the head a few times. Did staff do or say anything? Naw, of course not. It went unaddress or prehaps just unnoticed. Better staff and security are needed.

submitted by Tom for Crocodile Rock on January 6, 2011

Its a Awesome place to have fun,fun and Just fun !